Heads Up: Are You Developing “Text Neck”?

Billions of people now walk around hunched over their smartphones. The hazards of texting include motor vehicle accidents, exposure to EMFs, and walking into fountains—but here’s a new one to add to the list: “text neck.” 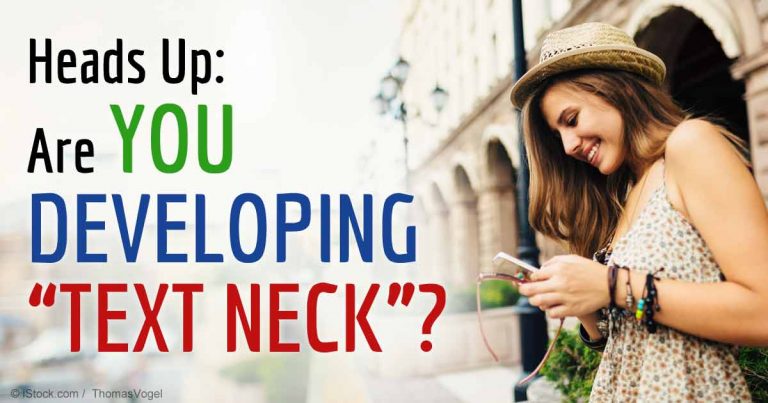 While it is nearly impossible to avoid the technologies that cause these issues, individuals should make an effort to look at their phones with a neutral spine and avoid spending hours each day hunched over.”

Imagine Your Head Weighing as Much as Several Bowling Balls!

Your head weighs about 12 pounds, and if you spend a significant amount of time hunched over—meaning, your head bent forward and down as when texting, emailing, or gaming—the forces on your cervical spine are substantial.

The degree to which this position affects your spine depends on the angle of the bend and the amount of time you spend with your head in this position.

In his study, Dr. Hansraj determined that, when you bend your head forward at 15 degrees, its weight effectively increases from 12 pounds to 27 pounds. At 45 degrees, your head exerts 49 pounds of force, and at 60 degrees, 60 pounds—this is like carrying an eight year-old child around on your neck for several hours a day!

Others claim that the pressure on your spine doubles with every inch of head tilt.3 In 2013, some 1.91 trillion text messages were sent in the US, according to CTIA, The Wireless Association.4 Smartphone users spend an average of two to four hours per day hunched over their devices, which amounts to 700 to 1,400 hours per year that they are exerting this stress on their spines.  High schoolers may be even worse off, spending an additional 5,000 hours in this position, according to the study.

According to Hansraj,5 “text neck” may lead to early wear and tear on your spine and early spinal degeneration. As you repeatedly pull and stretch this area, it may become inflamed over time, which can result in muscle strain, pinched nerves, herniated discs, and abnormalities to your neck’s natural curvature.

This forward neck posture has also been linked to headaches, neurological problems and heart disease. That is sad because it is relatively easy to assume a healthy natural posture with your neck. All you need to do is slide your chin up at 45 degrees, which puts your head over your shoulders and causes your chest to move forward.

Not Everyone Agrees with Dr. Hansraj

Although most agree that cell phones contribute to poor posture to some degree, a few experts don’t accept the conclusion that cellphones are responsible for a spate of spinal wreckage.

Washington University neurosurgeon Ian Dorward has criticized Hansraj’s study for not specifying where the numbers came from. Dr. Dorward makes the point that people have evolved to have their heads flexed in a variety of different angles and postures without issue, such as when reading a book.6

He argues that the biomechanical forces on the spine and poor posture related to obesity and excessive sitting are a far more serious concern—which I believe is a legitimate argument.

Dorward does concur that the musculoskeletal problems associated with spending an inordinate amount of time with your head in a forward flexed position is a valid concern   However, Dr. Hansraj may be onto something when it comes to the effects on children:

“The problem is really profound in young people. With this excessive stress in the neck, we might start seeing young people needing spine care. I would really like to see parents showing more guidance.”

In a recent UK study7 involving 10 year-olds, up to 10 percent may already have the precursors to bad backs, and nine percent of the kids already showed degenerative disc problems with at least one disc. The researcher attributed this to lugging heavy school books, watching TV, and playing video games, but texting may play a significant role.

Rates of back pain are on the rise for children8 as well as adults. This can partly be blamed on our modern technological habits, but greater factors may be poor diet, inactivity, excessive sitting, and obesity.

More Than Just a Hunch

Posture is more powerful than previously thought, influencing your thoughts, feelings, and actions. Not only can poor posture affect your physical body, but it’s also been shown to affect your mood, self-concept, and how others perceive you.

For example, slouching compresses your internal organs, restricting their function and making you appear heavier. An open, expansive, upright posture is considered a “power posture” by humans, as well as by other primates.9 Posture can even affect your memory recall:10

“When sitting in a collapsed position and looking downward, participants in a study found it much easier to recall hopeless, helpless, powerless, and negative memories, than empowering, positive memories.

When sitting upright and looking upward, it was difficult and for many of the participants nearly impossible to recall hopeless, helpless, powerless, and negative memories and easier to recall empowering, positive memories…

Sitting up straight helps increase blood flow and oxygen to the brain, and according to some accounts, by up to 40 percent.”

Poor posture can have wide-ranging detrimental effects on your body, several of which are listed below. Therefore, paying attention to your posture— which includes the position of your head, neck and shoulders—should be an important part of your overall health plan.